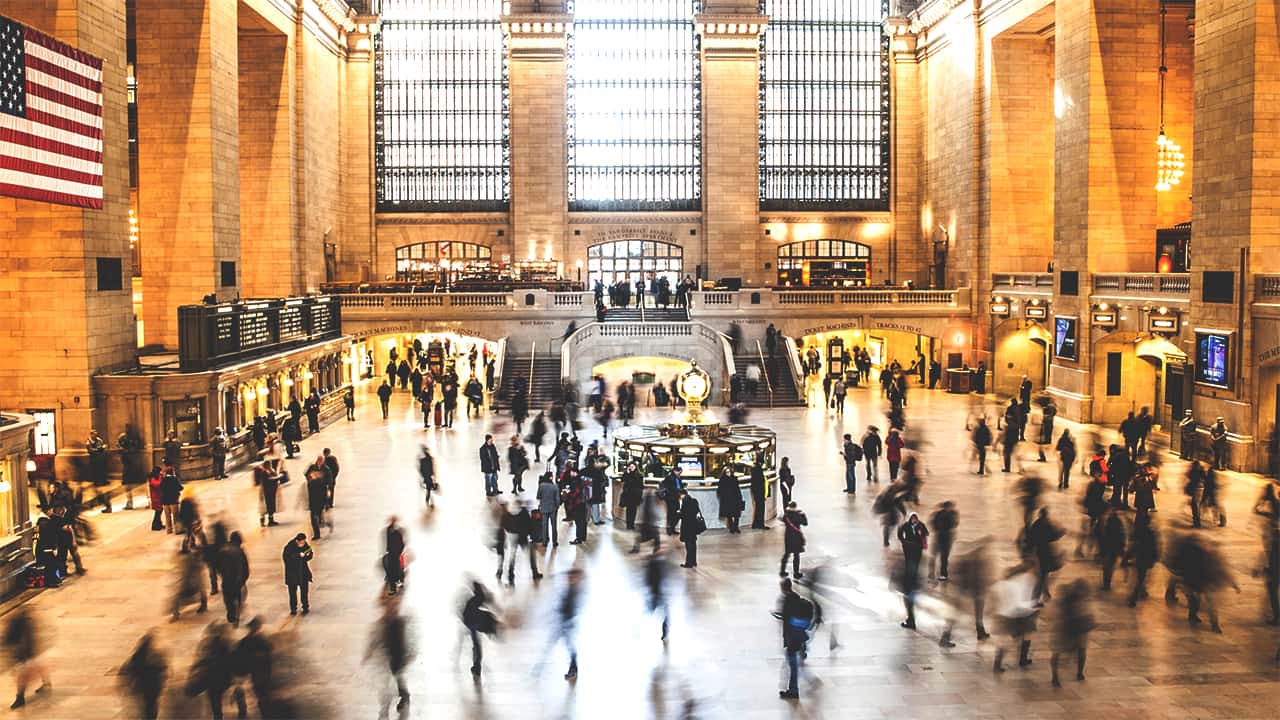 The Census Bureau recently released its annual estimates for how the populations of each of the 3,142 counties and county-equivalents in the U.S. changed in the year between July 1, 2017 and July 1, 2018. 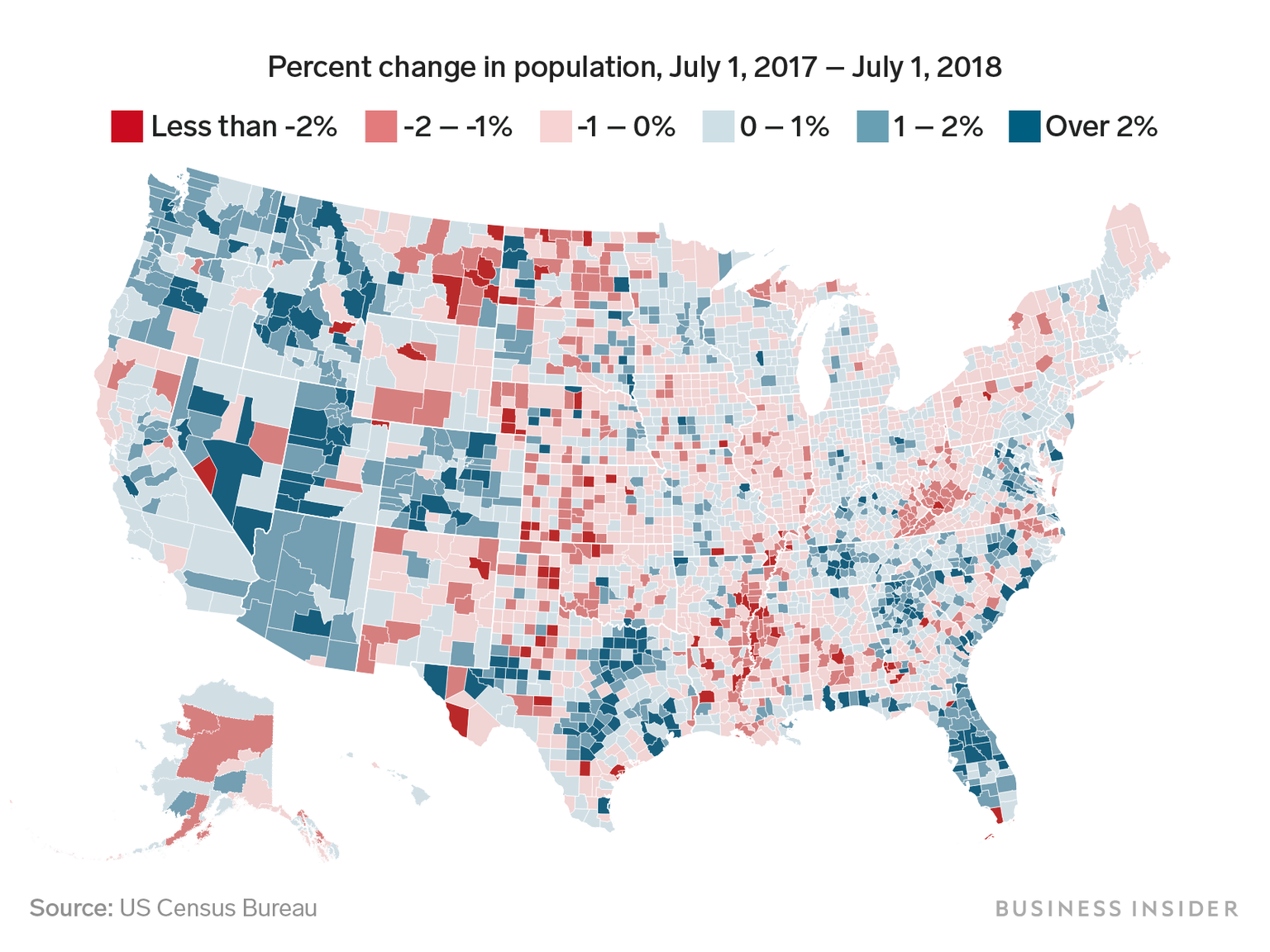 The above map shows the percent change in population over that year in each county, with counties in blue having growing populations and counties in red seeing declines over the year.

Some of the big winners are large metropolitan areas in the south and west. The rings of counties around Texas' big cities of Houston, Dallas, and San Antonio show up in dark blue, and most of Florida's counties saw strong growth over the year.

The Investment Forecast also indicates smaller cities will lead economic growth in 2019. The early stages of the growth cycle favored major business and economic hubs, with primary markets capturing 45 percent of the jobs created in 2012 and tertiary metros generating only 34 percent of new jobs. By 2017-18, the metrics had inverted to favor tertiary markets. This trend will likely continue in the coming year as companies add facilities in smaller cities will look to capitalize on local talent that is unwilling to relocate.

Here are the ten counties with populations over 10,000 that saw the biggest percent growth over the year: ![Fastest growing](/static/img/post/Fastest growing.png)

And here are the ten counties with at least 10,000 residents that had the largest declines over the year: 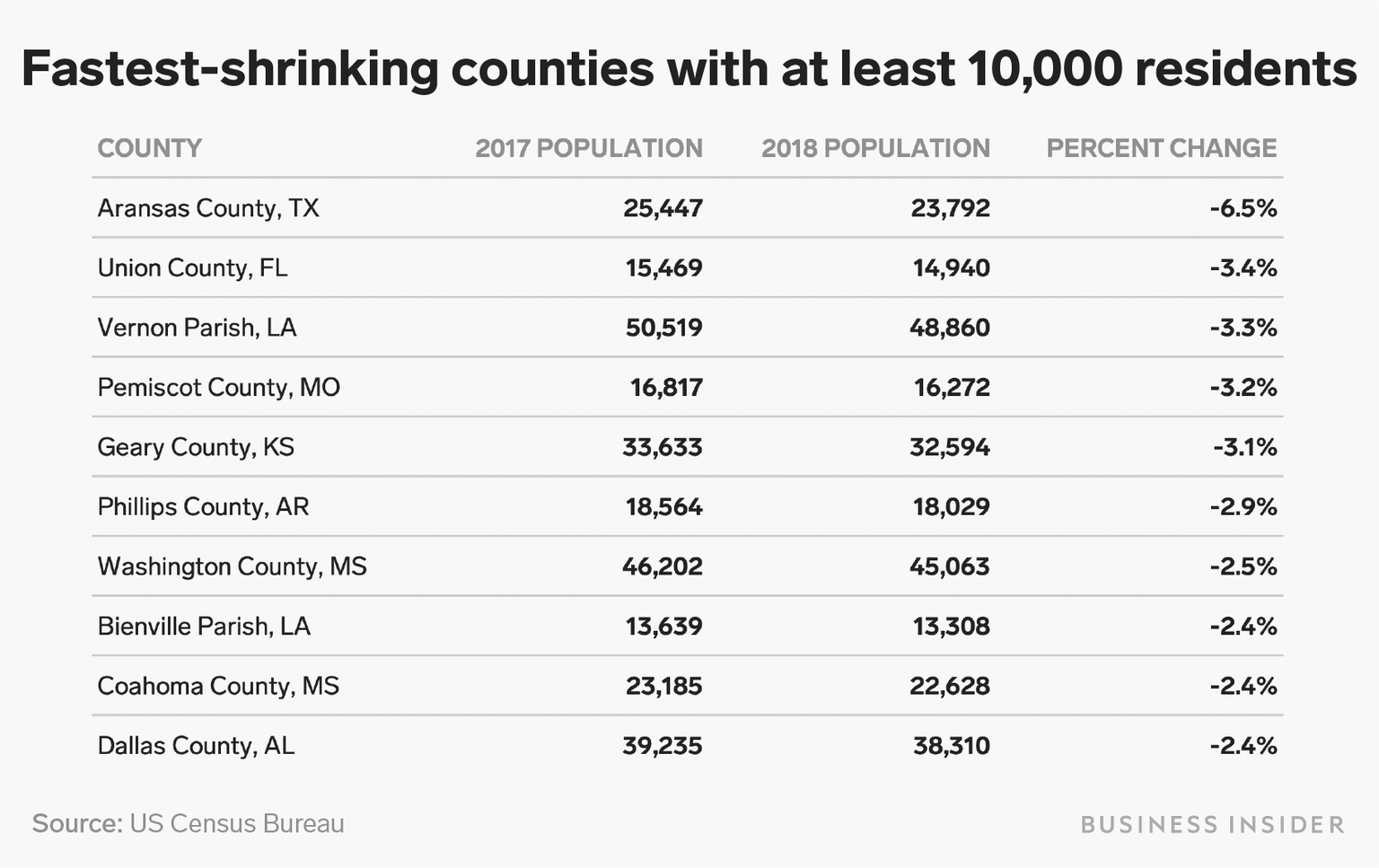 According to the Marcus & Millichap Investment Forecast, in summary, demographic changes underscore long-term need for storage. Population growth is a driver of self storage demand. Over the past several years there has been a migration south and west across the United States. Florida markets such as Orlando and Tampa-St. Petersburg are welcoming nearly as many new residents as the larger cities of Dallas/Fort Worth and Phoenix, which continue to expand at a fast pace. Smaller metros, including Nashville, Raleigh and Austin, are also growing at rapid clips, particularly considering their current populations. Job openings, lifestyle preferences and tax reform are strong influences on these migration trends. An unencumbered young labor force is demonstrating a willingness to move, sometimes by vast distances, for great job opportunities. Lifestyle and climate can also exert a strong force on where someone chooses to live. The Tax Cuts and Jobs Act, which came into effect last year, changed how state and local taxes are deducted from federal returns. The resulting financial implications have some considering moving to areas with lower tax burdens. As these factors drive migration into certain metros, the demand for self storage will improve as the population increases.