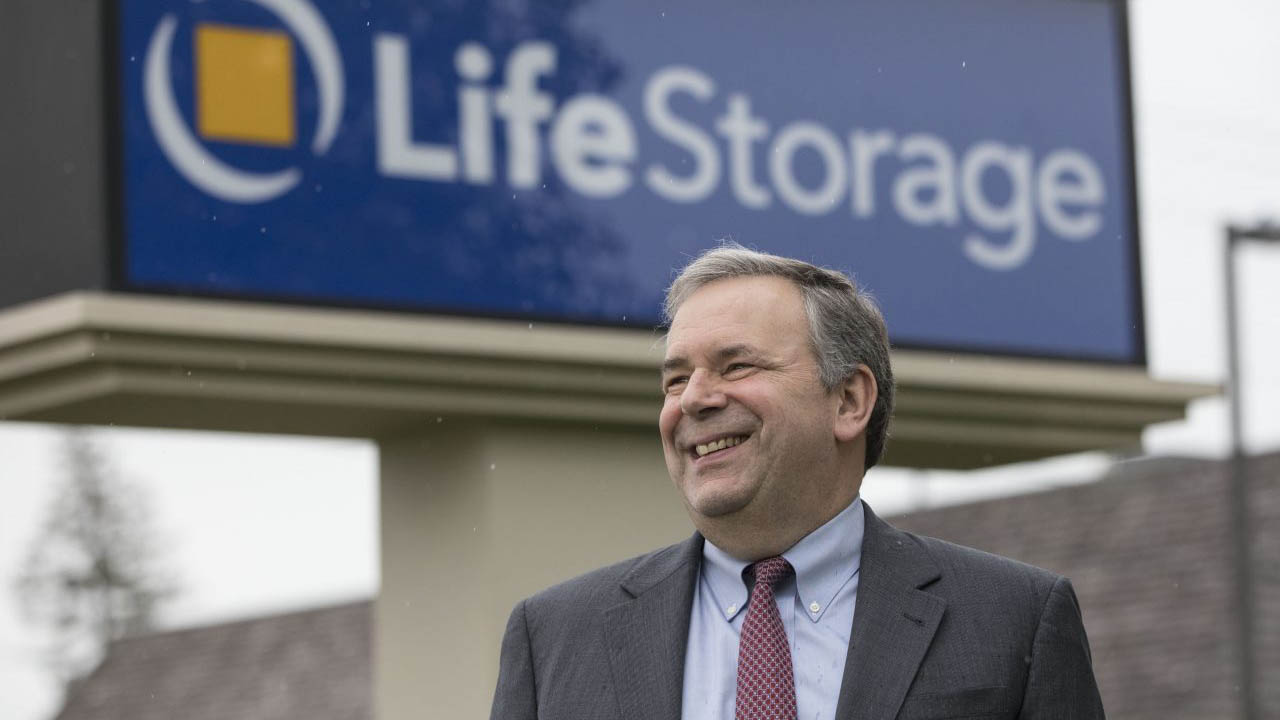 Changing of the Guard: Life Storage Completes 2018 on a High Note

For 35 years, David Rogers has played an integral role of the Buffalo, New York-based self storage REIT, Life Storage. He joined during the early 1980’s to help grow the company with its three other co-founders; Robert J. Attea, Charles Lannon and Kenneth F. Myszka.

Life Storage, Inc. is a fully integrated, self-administered and self-managed real estate investment trust (REIT) that acquires and manages self storage properties throughout the United States. The company employs over 1,600 people and operates approximately 750 self storage facilities in 28 states. Life Storage was originally known as Sovran Self Storage, Inc., operating under the brand name Uncle Bob’s Self Storage for more than 30 years.

Founded in 1982, the company was originally a financial planning firm but opened its first self storage facility in Florida in 1985 (and still operates this facility today). Within three years, it owned approximately 30 facilities along the East Coast and added 62 facilities over the next decade. In 2016, it began acquiring properties on the West Coast.

Life Storage went public on the New York Stock Exchange in 1995, trading under the name Sovran Self Storage. Within a year, it doubled its portfolio of 111 self storage facilities along the East Coast and Texas to 222 facilities.

On July 18, 2016, Sovran Self Storage completed the acquisition of an 84-property, Class-A self storage portfolio, and on August 16, 2016, the company officially rebranded itself to the progressive name, Life Storage – an investment totaling $1.3 billion. The total cost of the rebrand for its existing facilities? $22 million.

“Life Storage is the perfect brand name for our Company and for our stores. Our customers see us as an extension of their homes or businesses, where the environment is welcoming, and their belongings are secure. We’ve always operated with that in mind, but the Life Storage name brings it into focus – it’s about the customer, not about us.”

Changing of the Guard

On February 25, 2019, Life Storage reported on its fourth quarter earnings for 2018. On March 1, Rogers will officially hand over the reins to Incoming Chief Executive Officer, Joseph V. Saffire. Saffire began the call by acknowledging Rogers for his exemplary contributions to the company.

“Under Dave, the company changed dramatically. We broadened our scale meaningfully, we diversified the geography of our platform significantly, we added third-party management capabilities, and we embarked on a number of industry-leading technology initiatives that will put us well ahead of our competitors over time.”

Saffire added that Rogers will remain on the Board, where the company can continue to benefit from his perspective.

Saffire joined the company on November 1, 2017 as its Chief Investment Officer and brings more than 25 years’ experience in commercial banking and executive leadership, working with companies such as Wells Fargo, HSBC and First Niagara Financial Group.

Also on the call, Rogers noted this would be his 94th quarterly earnings call he’s helped host. He spoke to the growth that took place upon completion of the company’s IPO where, at that time, had an enterprise value of $136 million.

“Today, that enterprise value is well over $6 billion, more than 45 times original size, and yet, there's a lot of growing still to do.”

During Q4, and with the revamping of its acquisitions team, the company added six wholly owned properties for $58 million. It has traded stores that were on average 27 years old for stores that are on average seven years old. With this, the rent per square foot has increased from less than $12 to nearly $17. These fully-matured stores with plus 90-percent occupancy are now traded with ones that are roughly 65-percent occupied.

Saffire said they expect to continue to capitalize on favorable market conditions in 2019 and project sales of up to another $225 million of mature assets with the expectation that those proceeds will be reinvested in properties with improved growth prospects.

The company continues to identify and act upon opportunities to upgrade its portfolio. The desire is newer facilities through acquisitions achieving higher rental rates, lower occupancy and revenue per store greater than $1 million.

Saffire highlighted that the company’s view of supply remains generally unchanged. They continue to see pressure in Chicago, Miami and in the company’s Texas markets of Dallas, Houston and Austin.

The company wrapped up a record year with the successful on-boarding of 42 high-quality stabilized stores in the southeast. In 2018 collectively, it added 69 stores and has an additional 22 under contract. As of the year-end 2018, almost 50% of its managed portfolio now includes properties where Life Storage holds no ownership interest. That's an almost 100% increase for two consecutive years. Additionally, the company has now expanded its third-party management platform into the Canadian market; four managed properties in the Greater Toronto Area, one of the largest North American markets.

“We are excited about the traction we have generated in our third-party management business, and we will continue to drive additional business going forward, said Saffire. “Our pipeline remains strong. The growth of our third-party platform has also provided us with a robust pipeline of off-market purchase opportunities. In fact, of the acquisitions mentioned above, four were from stores we were managing.”

Rent Now is a fully digital rental platform for customers who prefer to self-serve and skip the counter (digital lease). The platform is available in 530 stores and remains on-track to complete its roll-out across the company’s owned and managed portfolios in the second quarter.

Warehouse Anywhere, a supply-chain logistics company utilizing technology to deliver commercial strategy for B2B and B2C customers. The company expects to grow from just 4,000 views in 2017 to an expected 200,000 views in 2019 of its website.

Saffire said that the company is allocating resources appropriately to support this new platform. He added they are probably the only storage company to recruit and hire executives from traditional logistics businesses such as FedEx.

“In summary, I'm excited for 2019,” said Saffire. “Though supply concerns remain, we have a great team and strategy in place to continue driving shareholder value.”

The company’s balance sheet remains very solid, and it continues to have significant flexibility to capitalize on attractive investment opportunities when they meet the company’s return requirements.