Neighbor is Out to Disrupt Self Storage: It’s Like Airbnb For Your Stuff

This article originally appeared on CNBC

Got extra stuff? Got extra space? A new company is ready to make a match. Neighbor, based in Salt Lake City, connects homeowners online with people who need storage space. Its CEO says the barely 2-year-old company is already seeing 500% annual growth.

“Currently there are more storage facilities in the U.S. than there are Starbucks, McDonald’s, WalMarts, Home Depots, Dominos pizzas, Dunkin’ Donuts and Costco’s combined. So it’s just this massive industry that we are trying to disrupt,” said Joseph Woodbury, co-founder and CEO of Neighbor.

The premise is pretty simple, much like Airbnb, just with stuff instead of people. Homeowners can advertise space and set their own prices, although the website offers guidelines. Listings are now in 48 states and the District of Columbia, and it is also going international.

“It’s not just garages and basements and driveways,” said Woodbury. “We’ll have people put up barns, their old barn, and they’ll store classic cars in their barn. We have people put up even small spaces in university towns. People put up a closet, and students will come store two or three boxes in their closet.”

The company did not disclose revenue. Last year, it raised $2.5 million and is currently in the midst of another funding round.

David and Bernice Cohen have a large family home in Atlanta and came upon Neighbor by chance.

“It was during the Super Bowl, and we looked at Airbnb but decided no, that would be too invasive,” said David Cohen. “But we found Neighbor.com, where we could just rent out a little bit of our space that we weren’t even using and get a little extra money, so why not?” 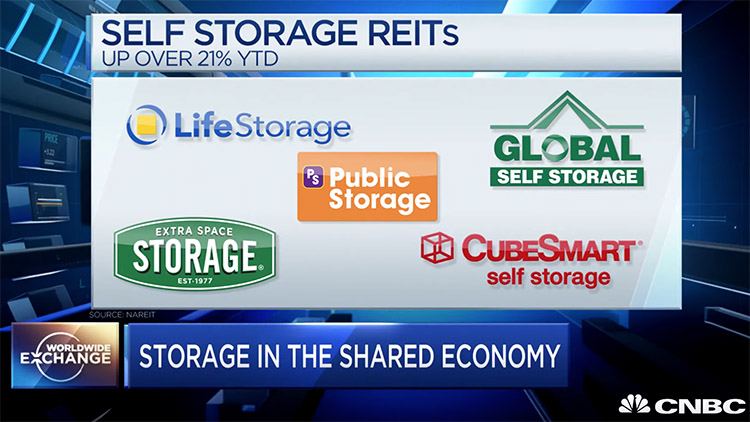 They have a large, relatively empty attic, so they put it online, and a local college student rented the space. The Cohens are charging her $20 a month, far less than public storage companies. Now they are renting out an extra parking space for $100 a month.

Homeowners are allowed to inspect anything they store, and Neighbor insures them for up to $2 million in case their home is damaged or someone is hurt on their property while moving their stuff in. Homeowners also have the right to reject anything.

“Yeah, we definitely wouldn’t have like fireworks or anything. Chemical or animals or humans,” added Bernice.

Renters also get some insurance on their goods and the added convenience and safety of a family home.

“One in 5 storage facilities gets broken into every year, so when you’re storing your items in a residential area, they’re already safer,” said Woodbury.

It is also a lot cheaper for renters than the big public companies because homeowners have less overhead. Large companies charge about $50 per month for a five-foot-by-five-foot storage space; listings on Neighbor.com can be half that for more space. Neighbor gives homeowners guidelines, but in the end it’s up to them to set the price.

“I went kind of low to see if I could rent it out first, and once we did that we kind of moderated it,” said David. “We also looked around at what U-Haul or one of the bigger self-storage places are charging and then went below that, but wanted to keep it somewhat comparable.”

There are currently six self storage REITs in the $38 billion sector, including Public Storage, Extra Space Storage and CubeSmart. Growth in these stocks overall is a strong 21% year to date, according to NAREIT.

If Neighbor’s storage business really takes off, it could take a bite out of these companies, just as home sharing and ride sharing disrupted their sectors. So far, it appears there is plenty of space in the space.

Diana Olick is an Emmy Award-winning journalist, currently serving as CNBC’s real estate correspondent across all CNBC platforms. Her work on CNBC.com won the Gracie Award for “Outstanding Blog” in 2015. She has also contributed her real estate expertise to NBC’s “Today” and “NBC Nightly News” and she is a frequent guest on NPR.

South Africa's largest self storage property fund continues to impress and prove resilience of the storage sector.
For Extra Space Storage, anticipated headwinds from the coronavirus pandemic have shifted to tailwinds.
The ongoing pandemic may be linked to the rapid population growth in secondary markets.
A report by Cushman & Wakefield paints an optimistic picture for self storage after an initial COVID shock.
Storage for the huge vehicles can be difficult to come by, and operating a site can be similar to self storage.