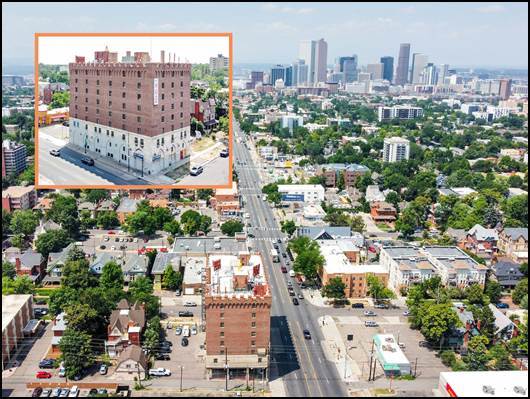 Charles "Chico" LeClaire, Executive Managing Director Investments, and Adam Schlosser, Senior Vice President Investments, in Marcus & Millichap’s Denver, Colorado office had the exclusive listing to market the property on behalf of the Seller, a Denver partnership that has been in the business for over half a century. “Mr. Buzz Victor and Mr. Barry Bender have now sold the last of their self storage facilities,” said LeClaire. “The Buyer, a partnership out of northern California, has many years of experience in the industry and plans on renovating the interior of the building but keeping the marble and brick exterior of the historic and iconic eight-story building located near Denver’s East High School on East Colfax Avenue.”

Built in 1926 as the Weiker Depository, the primary purpose of the building was to store excess household items for residents moving into the Capitol Hill neighborhood of Denver. From 1900 to 1910, Denver’s population grew 159 percent, and grew another 120 percent from 1910 to 1920. Many of the people moving to Denver could not afford to live in the large Victorian homes of their predecessors, and instead moved into smaller apartments and boarding houses.

Neighborhood opinion was so against the idea of a large, eight-story building obstructing the skyline that the Denver City Council denied a building permit for the project. The case was eventually heard by the Colorado Supreme Court. The justices repealed the city council’s decision and allowed construction to begin. The Weicker Depository was designed to blend in with the neighborhood. The lower walls were clad with travertine marble, and the upper stories were brick and laid in a unique pattern called Monk bond, styled after the Italian towns of Florence and Sienna. Upon completion, the Weiker Depository was so admired that it was written up in Architectural Record and in Western Architect and Engineer. The Weiker family continued to own the property up until 1976, when they sold it to Buzz Victor, the Managing Partner of Minibrook Partnership. He turned the building into the first mini-storage facility in Denver and one of the first mini-storage conversions nationally.

Mr. Victor is considered a pioneer in field of self-storage. He has developed twenty-five mini-storage facilities in twelve states and built his first project in Omaha, Nebraska in 1973, and was also a founder of the Self Storage Association, where he served as it's first President for two terms. It has been nearly 100 years have since the Weicker Depository was built, and not much about the exterior of the building has changed. However, the neighborhood around the property has transformed. Capitol Hill is now Denver’s most densely populated neighborhood and is relatively affordable compared other central neighborhoods, however, the average apartment size in the neighborhood is 843 square feet. Because of the high density and small living space, the need for extra storage – self storage – remains.

About The LeClaire-Schlosser Group of Marcus & Millichap
The LeClaire-Schlosser Group is a national self storage brokerage team that has closed over $6 billion in transactions across the United States. With a combined 70+ years of experience, we have the knowledge and expertise to assist our clients in reaching their short and long-term investment goals. We offer extensive underwriting, customized marketing, and unparalleled transactional expertise to achieve the best price and terms. We pride ourselves in offering unmatched brokerage and advisory services to both institutional and private clients alike. To learn more, please visit: www.leclaireschlossergroup.com