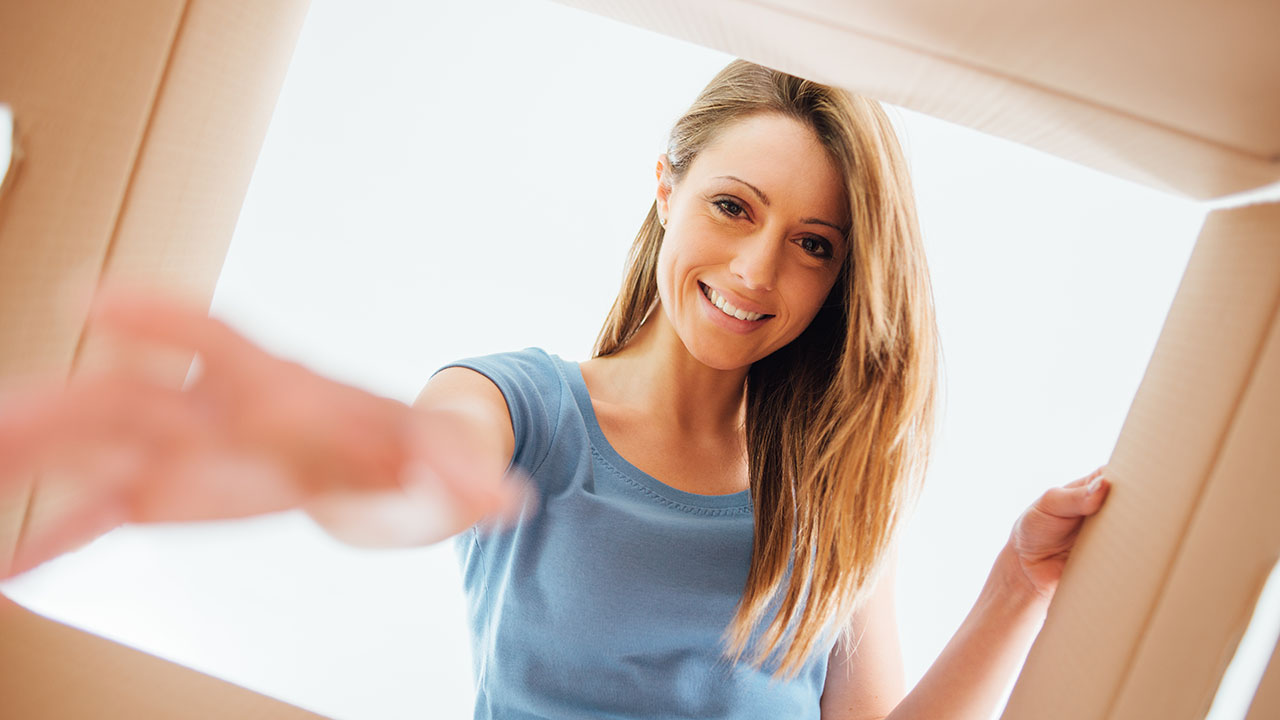 Unpacking the Truth About Self Storage Demand: Why the Industry May Have It Wrong

What drives self storage demand?

Urbanization is viewed as the driving factor that has led the industry to success. As such, the industry has focused its analysis on population growth and population density to try and understand the demand in the sector. Modeled around changes in urbanization (population growth and density of the urban regions) the sector has expanded into a considerable footprint consisting of ~24,000 facilities totaling ~1.4bn square feet in the top 200 U.S. urban regions alone. Given the consistent industry growth and the unclear drivers, we have set out to define the factors that move the industry forward.

Self storage revenue growth has been exceptional

Urbanization is viewed as the driving factor that has led the industry to success. As such, the industry has focused its analysis on population growth and population density to try and understand the demand in the sector. Modeled around changes in urbanization (population growth and density of the urban regions) the sector has expanded into a considerable footprint consisting of ~24,000 facilities totaling ~1.4bn square feet in the top 200 U.S. urban regions alone. Given the consistent industry growth and the unclear drivers, we have set out to define the factors that move the industry forward.         ##### Urbanization is believed to drive self storage demand ![image](/static/img/post/image.png)

The current demand framework is flawed

Though the industry has committed to using population growth and density as metrics for understanding self storage demand, from an analytic perspective, these show no correlation to self storage growth.

If we gauge the relationship between urban population growth and REITs revenues (-64% correlated), for example, we see a divergent directionality. The decreasing revenue growth rates from 2008-2009 could be interpreted as a direct link to the slowing urban growth rates; however, the consistent growth in revenue thereafter does not oscillate with population, especially in years when the latter remained stagnant.

Population growth has no correlation to REIT revenue growth 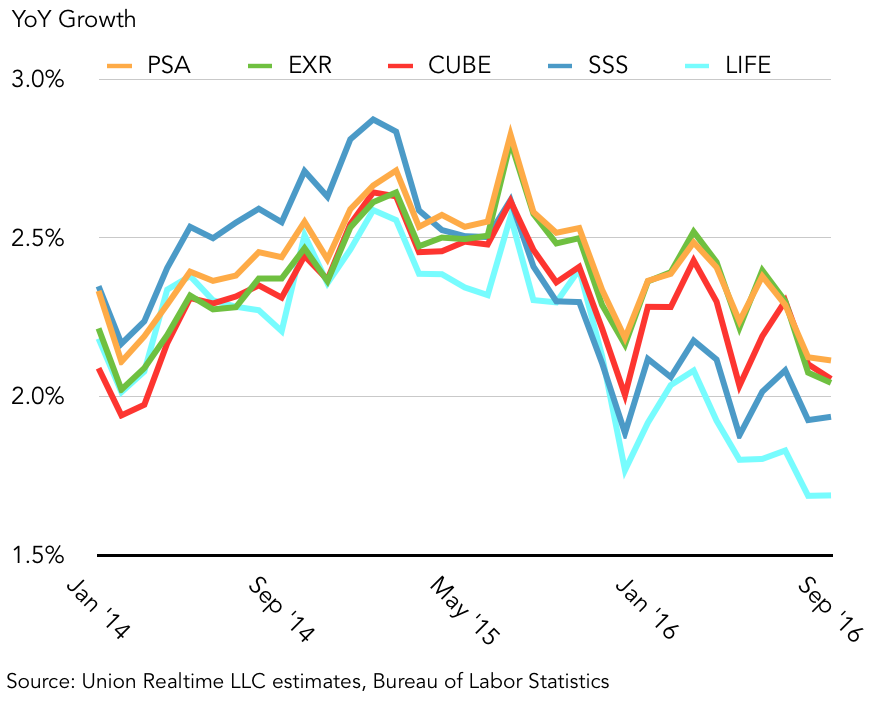 Similarly, there is limited statistical evidence showcasing a relationship between greater population density and storage prices. Our examination of the top 150 markets show no relevant correlation between self-storage SQFT per capita and the prices paid for an average 10’x10’ unit in the region (-23%). In other words, the data shows that population levels have limited impact on self-storage demand.

The clear weak correlation between fluctuations in population and revenues in public REITs impels us to divert our focus from population growth and density toward the underlying drivers of demand.

In 2014, SpareFoot, Inc., the largest self storage aggregator, conducted a market survey aiming to determine the motivating factor that led to the use of self storage. This survey reached 12,000 self storage customers and revealed relatively clear market drivers.

The data points collected convey that 68% of customers use storage facilities while changing residence (defined as migrants) and 32% store ‘extra things’ or items that require a controlled environment. Of the 68%, the majority of self storage occupancy is driven by the following ‘life events’: job relocation (26%), downsizing (19%), college (8%), divorce (7%), and military (2%). The study’s detailed analysis into the market confirms the industry’s consensus view that ‘life events’ drive self storage consumption.

Lower per capita storage does not indicate higher price

Migration and population are not the same

Not equating population to ‘life events’ is a major step towards understanding the sector’s success—the measuring factor for population differs entirely from what the survey reveals.

Instead, the industry ought to recognize that the majority of self storage customers are not there on account of population growth and/or density, rather demand is driven by the various forms of migration. Tracking migration, therefore, will lead to a better understanding of the sector’s directionality.

It is statistically and fundamentally evident that self-storage demand is not driven by population. Therefore, our analysis focuses on examining migration as a driver of self storage demand. Although migration contains a multitude of types, the majority of self storage customers rent units for job relocation purposes (26%). Given the high percentage of demand, job relocation migrants require our first-order of attention.

Two metrics have proven to be superior to understanding job relocation migrants: labor force flows and nonfarm payrolls. The former tracks the gross number of people changing jobs whether they are employed, unemployed, and/or those not in the job market—the most accurate measure to understand job relocation migrants as it demonstrates the gross movement in employment. The latter, nonfarm payrolls, showcases the total number of paid U.S. workers - a pivotal metric to understanding what drives labor force flows. This metric is also highly pragmatic as it allows for monthly tracking at a regional level.

Statistical Evidence: Payrolls as a framework for demand

From a macrocosmic perspective, the REITs revenues have a 97% correlation to nonfarm payroll, indicating that an increase in the latter will mirror an increase in self storage revenue, i.e. demand. Shifting our perspective by utilizing these two metrics is a major step in gaining a better understanding of the regional and national economic strength that then provides an opening into discerning the fluctuations in self storage demand.

The microcosmic perspective of our analysis also allows focusing on the affects of employment on a local level - an analysis most suitable for operators and developers. If we turn our attention to Houston, for example, we see a 92% correlation between Houston nonfarm payroll and Extra Space Storage’s (EXR) occupancy. The occupancy of EXR’s Houston locations have moved in tandem with Houston’s nonfarm payroll. As the chart clearly demonstrates, the decrease in nonfarm payroll since 2015 has had an impact on the decline in demand, and the recent upswing in demand also moves in tandem with nonfarm payroll.

Our aim is not to throw out the population metrics entirely, as they are well suited for developers and acquirers alike for reasons that deal with analysis and absorption of new supply. Given the success of the industry, many facilities are ‘over-earning’ - allowing the expansion of footprint by building new developments at the expense of price while still producing attractive returns.

As we look at the overall growth of the industry, however, we are convinced that the demand framework must evolve from its current analysis measuring population and move towards tracking migration. Tracking nonfarm payrolls’ and labor force flows’ movements should be at the forefront of the monthly sector overview meetings for all investors, operators, and developers alike. Gaining a clearer understanding of migration will lead to superior investments in the sector based on statistical measures which in turn will lessen the probability of over-supply. The sector’s correlation to these labor statistics is evident and makes labor force flows and nonfarm payrolls viable metrics to understanding the sector’s drivers.

To help our clients prepare for the industry’s regional change in demand, we track the public REITs specific exposure to monthly payroll growth. These trackers allow for more granular analysis of investments and are provided in real-time through our Advocate software platform. To be added to our Advocate distribution list, please fill out the Custom Payroll Report.